who made an offer to buy Twitter last April Elon Musk In the following weeks, it had a conflict with the Twitter administration over bot accounts …

who made an offer to buy Twitter last April Elon Musk In the following weeks, it had a conflict with the Twitter administration over bot accounts. While Musk withdrew his offer as a result of this dispute, Twitter filed a lawsuit against Musk and then Musk against Twitter. As the court date approached, Musk renewed his bid for Twitter in an unexpected form.

Words and evidence to be used as evidence in the court, the date of which is set as October 17, continues to be collected for days. The biggest and most controversial of these evidences is It was revealed by Twitter lawyers on September 28 . All the conversations Elon Musk had with valuable names on Twitter were shared in a public form. So, what was said in those speeches?

Elon Musk’s statements presented as evidence in favor of Twitter: 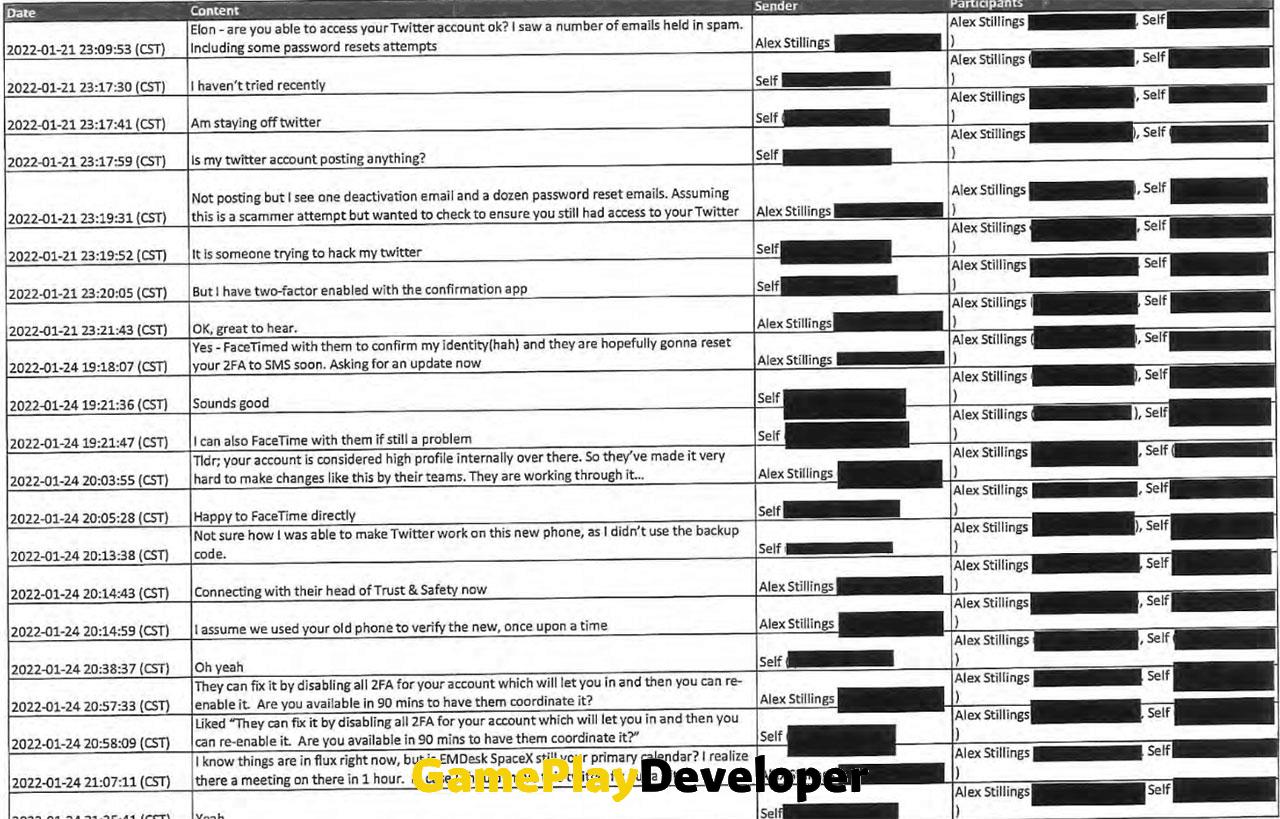 The messaging in question, which was presented as evidence in favor of Twitter, started as of January 24, 2022. Musk, IT executive at SpaceX Talking to Alex Stillings.

In this conversation, which took place on January 21 and 24, Stillings was suspicious of Elon Musk’s e-mail when he saw some spam e-mails that seemed to have come to Twitter. Later, Elon and Stillings contacted the Twitter administration to work to secure the account, setting up two-factor authentication again.

The seeds of the idea to buy Twitter are planted on March 24:

In Elon Musk’s Twitter statements The first signs that he could buy the platform began to appear on March 24.On this date, Musk was contacting Palantir founder Joe Lonsdale, who was referred to as “TJ” at the same time, and there was a conversation as follows:

Musk shares “Twitter should be open source” during this chat, and Lonsdale writes a statement on this post. Lonsdale was saying that she was joining Musk and that there should be no censorship. Also ” What is happening now is a closed corruption!” says Musk, who also liked this statement.

The seeds have grown enough: Jack Dorsey and Musk speak:

The documents also include excerpts from a conversation between Jack Dorsey and Musk on March 26. In this talk, Dorsey said, A new social media platform is needed. , but he says it can’t be a company. Moreover, he attributes the reason for his separation to this. Elon Musk asked Dorsey, “So how should this platform be?” begs the question. Jack’s response is as follows:

“I believe it should be an open source protocol, funded by an organization that does not own the protocol but only develops it. It’s a precedent for what Signal did. It shouldn’t even be an ad model. Otherwise you will have a surface that governments and advertisers try to control and influence. If there is a centralized entity behind it, it will be attacked. It’s not a messy business, it just needs to be done right so it doesn’t relive what happened to Twitter.”

After this article, Elon Musk responded to Jack’s idea with “ Very interesting ” he replies. In his next message, Dorsey re-explains again about the flaws made on Twitter, that he should never have been incorporated, and that he actually left the company for that reason. After this, Dorsey and Musk plan a meeting.

Just an hour after Musk spoke with Dorsey, he contacts Twitter board member Egon Durban. Elon arranges a meeting with Durban. the result of this conversation can be clearly seen in the two subsequent messages…

Oracle founder Larry Ellison reaches out to Musk: “We need a new Twitter”:

On the night of March 26 to March 27, Larry Ellison told Elon Musk, “ Elon, I want to see you in the next days. I think we need a new Twitter. ” he uses. After that, Musk and Larry set up a meeting.

Meeting with Durban, Musk was accepted to the board of directors in less than a day:

Egon Durban, with whom Elon Musk has been interviewing about the governing council, creates a private message set a day later. This cluster includes Twitter CEO Parag Agrawal, Bret Taylor, and Twitter’s ‘Martha’. In his message to the cluster, Durban told Musk that he might be on the board. make everyone happy states. Interviews are held in the coming days.

What happens in the coming days?

Musk was in talks with Twitter CEO Parag, Martha and Bret Taylor over the coming days, and in this process, he was contacting Sam Bankman-Fried, who previously wanted to buy Twitter. These talks extended until April 3.

On April 4, Musk became the biggest shareholder of Twitter:

While Musk continued his talks with the Twitter administration, a big surprise came on April 4th. This surprise is presented through the United States Securities and Exchange Committee, It was the announcement that Musk bought 9.2% of Twitter. With the announcement, the Twitter administration contacted Musk. The process of including Musk on the board of directors has been expedited.

In the messages made with Musk, Parag and Twitter administration, Elon was turning down the invitation to the board of directors, which he accepted in the first place, within the same day. But Musk was re-agreeing to join the governing council a day after this message.

After Musk’s indecision, it was seen that Elon and CEO Parag jointly prepared the announcement that Elon was accepted to the board of directors. Parag first sent the post he had prepared, which we saw, to Elon, and shared it exactly the same after getting Elon’s approval:

Parag and Musk were ‘tech dudes’ in the first place:

Musk and Parag got along pretty well in the conversations that followed the April 5 announcement. The duo speaks to current issues on Twitter, Parag told Elon Twitter’s it can even provide information about the code basewas saying.

Musk explains some of his plans to his brother, and in fact, the secret of all this comes to light:

In the statement he sent to his chief brother Kimbal Musk on Twitter, Elon Musk was actually saying a truth that we know today:

“I have an idea for a blockchain-based social media system where you can share both payment and text messages/links like Twitter. You will need to pay a small fee to register your report on the chain, and the vast majority of bot and spam accounts will disappear. There is no throat to choke, but freedom of speech will be guaranteed.

The second part of the puzzle is a huge real-time knowledge base that keeps a copy of all blockchain messages, notifications sent to or sent by you, followers or unfollowers.

The third segment is an application such as Twitter, which accesses the knowledge base on the phone via the cloud. This idea might explode.”

Parag and Musk part ways after one day, Musk tells Parag he will buy Twitter (April 9)

Elon Musk said, Is Twitter dying? ” after sharing, he receives a private message directly from Parag. Parag tells Elon that such statements have influenced his work. Musk, on the other hand, is quite harsh against Parag:

“What work did you finish this week? I do not join the board of directors. This is a waste of time. We will submit a proposal to make Twitter a private company.”

Parag will have conveyed this statement to the Twitter administration, which later begins to meet with Bret Taylor. The two are arranging a meeting, Musk’s Twitter will not be on the governing councilofficially determined.

Elon Musk reaches Bret Taylor again 4 days later and states that he will submit a proposal for Twitter, the proposal will be shared publicly in the morning of the next day. However, Musk is the leader of the Boring Company, which he founded. He writes to Steve Davis about his second plan for Twitter:

“Plan B is a blockchain-based version of Twitter. Here Tweets will be embedded in comments in processes on the chain. You will have to pay a price of 0.1 Doge to post or repost a comment because of it.”

Elon Musk’s Twitter offering goes public on the morning of April 14, and Musk’s private statements with congratulatory messages from head to toe it’s filling up. Amidst these messages, “You are the hero Gotham needs!” including notices.

Elon is starting to reach out to people who will support him for the $44 billion deal:

Elon Musk reaches out to some familiar names to raise the necessary money in the $44 billion settlement. One of the most valuable of these names, Oracle founder Larry Ellison is happening. The conversation between Ellison and Musk takes the form:

Talks end on June 17. On this date, Musk was discussing bot accounts with Parag and sharing his views and plans on Twitter with the public. Elon, On July 9, 2022, Twitter will withdraw its offer., would be in court with Twitter, and would come to the fore at the end of September with these messages… You can reach the document containing all of Elon Musk’s Twitter messages from this contact.

How Is the Bottleneck Test Performed? Online and Programmed Procedures
All computers wear out over time. After a period of about five years, you see that your computer is no...

The Pillars of Creation recorded in its most perfect view
After many years of work, it was completed and sent to space. James Webb telescope captures images worth waiting for....

Crypto.com and Gate.io collaborate
Many countries are adopting and working on blockchain technology day by day. South Korea's second largest city busan, In the...
COMMENTS